This On-Demand Version is NOT eligible for CLE Credits. Please see other listing.

What is Nuts & Bolts 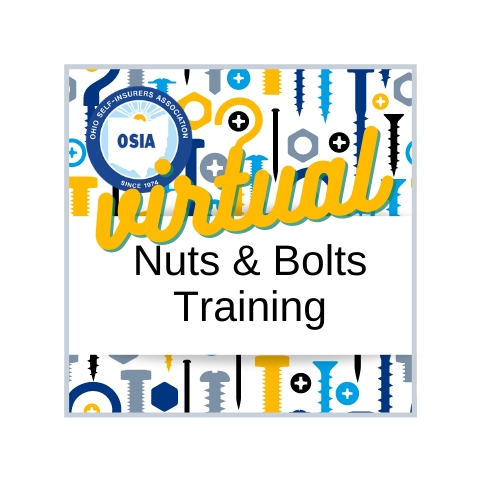 This information-packed training is designed specifically for those professionals who are new to the Ohio Workers’ Compensation Self-Insurance program, along with key staff seeking a refresher course on WC and SI basics. OSIA is now offering this as an on-demand product.

Each session is approximately 30 minutes to 1-hour in length.

The following webinars/sessions were recorded December, 2020.

This webinar will discuss compensation issues of when and what to pay, and other forms of compensation.

This webinar will discuss return to work efforts and issues.

This webinar will discuss the process of the Industrial Commission (IC) that provides claimants and employers the opportunity to resolve disputes over workers' compensation claims and claim elements.  It is a separate agency from The Ohio Bureau of Workers' Compensation (BWC).

This webinar will cover initial and ongoing treatment requests, data elements, and the Miller Criteria.

Melissa Black, Of Counsel at Dinsmore & Shohl LLP’s Columbus office counsels employers in workers’ compensation matters, including Industrial Commission hearings, court appeals, retaliation claims, workplace safety, settlements, and post-injury investigations. Her clients include state-funded and self-insured employers. She is familiar with the labyrinth of administrative systems employers must navigate when dealing with workers’ compensation matters, including the Industrial Commission of Ohio and the Ohio Bureau of Workers’ Compensation. She knows how to navigate businesses and companies through these and other processes while also ensuring they meet their professional goals. When a workers’ compensation matter proceeds to a court of common pleas, she utilizes her litigation and jury trial experience to vigorously defend against claims.

Jared Buker is an associate attorney in the Columbus office of Dinsmore & Shohl LLP, where he focuses his practice on workers’ compensation, employment, labor, and administrative law. He counsels clients ranging from small businesses to national and international companies on issues involving workplace injuries, labor disputes, company policy, retaliation claims, FMLA, the Americans with Disabilities Act, OSHA, and the Fair Labor Standards Act. When working with a client, Jared starts by gaining an understanding of their business, including their short- and long-term goals, and he uses this information to craft a legal strategy that meets the client’s short- and long-term needs. His experience includes practicing in state and federal court, as well as before administrative agencies like the Ohio Industrial Commission, the Ohio Civil Rights Commission, the Department of Labor, the National Labor Relations Board, and the Equal Employment Opportunities Commission. Jared earned his B.A., magna cum laude, from Youngstown State University, and J.D., cum laude, from Capital University Law School. While in law school, he was the Executive Articles editor of the Capital University Law Review, Volume 43, and recipient of the Dean’s Excellence Award in 2013. He is a member of the Ohio State and Columbus Bar Associations and is admitted to practice before the U.S. District Court for the Southern District of Ohio.

Preston J. Garvin began his workers' compensation career as a Hearing Officer for the Industrial Commission. He served as Legal Director, Chief Legal Advisor, to the Industrial Commission. In 1997, Preston and Michael Hickey formed the law firm of Garvin & Hickey, LLC. Preston is Special Counsel to the Ohio Chamber of Commerce for workers' compensation matters and Chairman of the Workers' Compensation Committee. He has testified before various House and Senate committees on numerous workers' compensation bills. He has participated in numerous Amici Curiae briefs before the Ohio Supreme Court. Preston has served on various Industrial Commission and BWC committees. He presently serves on the Rules Advisory Task Force. He has been listed in the Best Lawyers in America since 1995 and Columbus Monthly Magazine Top Lawyers in Columbus. He has been voted by his peers as one of the Ohio's Super Lawyers, with a placement of one of the top 50 lawyers in Columbus and top 100 in Ohio and he has an AV rating from Martindale Hubbell. Preston was the recipient of the Ohio Self-Insurers Association Patrick A. O'Neill award. Preston serves on the Board of Kids' Chance of Ohio and is a past member of the Board of Kids' Chance of America.

Vicky G. Hamilton has a background in healthcare beginning in a hospital emergency department following college, managing physician offices, and managing in hospital public relations and marketing.  She began working in 1989 in the role of a consultant with a third-party administrator taking on many elements in workers’ compensation.  She has been a Hearing Representative with CareWorks Comp since 2010.  Her focus is to learn and educate within her role the continual changes in workers’ compensation.

Richard L. Johnson has concentrated his practice in the area of workers' compensation defense for over twenty years.  He is a member of Eastman & Smith. He has represented both self-insured and state-funded employers before the Industrial Commission, Ohio Bureau of Workers’ Compensation, Self-Insuring Employers Evaluation Board and all levels of Ohio’s courts, including the Ohio Supreme Court. Mr. Johnson is accredited by the Ohio State Bar Association as a Certified Specialist in Workers' Compensation Law. He frequently lectures on workers' compensation issues and has given a number of presentations on various topics to many of Ohio’s local safety councils and human resources associations. He is a member of Eastman & Smith’s Labor and Employment Practice Group.

Debbie Lantman is the Manager – Workers’ Compensation for Formica Corporation in Evendale, Ohio. Managing self-insured, deductible, and guaranteed workers’ compensation programs in Ohio and the United States, including Puerto Rico. Having worked in the workers’ compensation field for 33 years, Debbie has managed self-insured and state fund claims for her employers and a third party administrator. Debbie’s background also includes human resource generalist, FMLA and ADA management, Paramedic, safety consultant, and emergency medical services instructor. Debbie was appointed by then Governor Kasich and now Governor Voinovich to the Industrial Commission Nominating Council. As a Board member of OSIA, Debbie participates on the BWC SI Financial Committee and the BWC SI Claims Committee. Debbie is a member of the Ohio Safety Congress EMS Committee.

Robert A. Minor, Esq. - Prior to his retirement on January 1, 2019, Buz Minor was a partner in the Columbus office of Vorys, Sater, Seymour and Pease LLP, and practiced in the area of labor and employment law.  His practice included workers' compensation defense before the agencies and courts, assisting employers in obtaining self-insurance status and in resolving SI compliance issues, participation before the Ohio Supreme Court as amicus curiae, the defense of direct liability actions and employment intentional torts, and OSHA compliance and defense.  Mr. Minor is the Executive Secretary of the Ohio Self-Insurers Association, serves on the Executive Committee of the National Council of Self-Insurers, and is a former President of the National Council.  Mr. Minor is a frequent lecturer before national and state audiences on employer liability law and is recognized in The Best Lawyers in America.

J. Andrew Recker (Andy) is an associate attorney in Dinsmore & Shohl LLP's Cincinnati office where he focuses his practice on workers' compensation defense and represents employers in both administrative proceedings before the Ohio Industrial Commission and court proceedings in Ohio courts. He has obtained favorable jury verdicts for employers in Ohio courts and is a strong advocate for employers in both the hearing room and courtroom. Prior to law school, Andy handled liability and casualty claims for Safeco insurance company and Macy’s department stores. Currently, he has leadership roles with the Cincinnati Bar Association’s workers’ compensation committee and actively speaks and presents to trade associations, bar associations third party administrators, employers and employer groups throughout the state.

Mark A. Shaw represents employers in workers' compensation, litigation, and employment matters. He has represented both private and public sector employers before state courts and at all administrative levels before the Industrial Commission. He is a frequent speaker and guest lecturer at seminars regarding workers' compensation and employment law topics.  Mr. Shaw is a member of Eastman & Smith, practicing in the Firm's Columbus, Ohio, office, and is listed in Best Lawyers in America®.

Noel C. Shepard represents a wide variety of companies in employment-related defense litigation and consulting services. Her practice focuses on defending employers of all sizes in every aspect of workers’ compensation from injury prevention to settlement. Noel offers her clients advice regarding policy writing, accident prevention and investigation, cost containment, and defense strategy. She defends her clients against workers’ compensation claims before the Industrial Commission of Ohio as well as in common pleas courts statewide. Additionally, she represents clients in writ of mandamus actions in Courts of Appeal. She also has experience in more specialized areas of workers’ compensation law, including Violation of Specific Safety Requirements (VSSR), handicap reimbursement hearings, and in rating matters before the Adjudicating Committee of the Bureau of Workers’ Compensation. Noel is also the Member-in-Charge of the Columbus office of Frost Brown Todd.

There are no cancellations, substitutions or refunds for the on-demand sessions of the Nuts & Bolts Training.